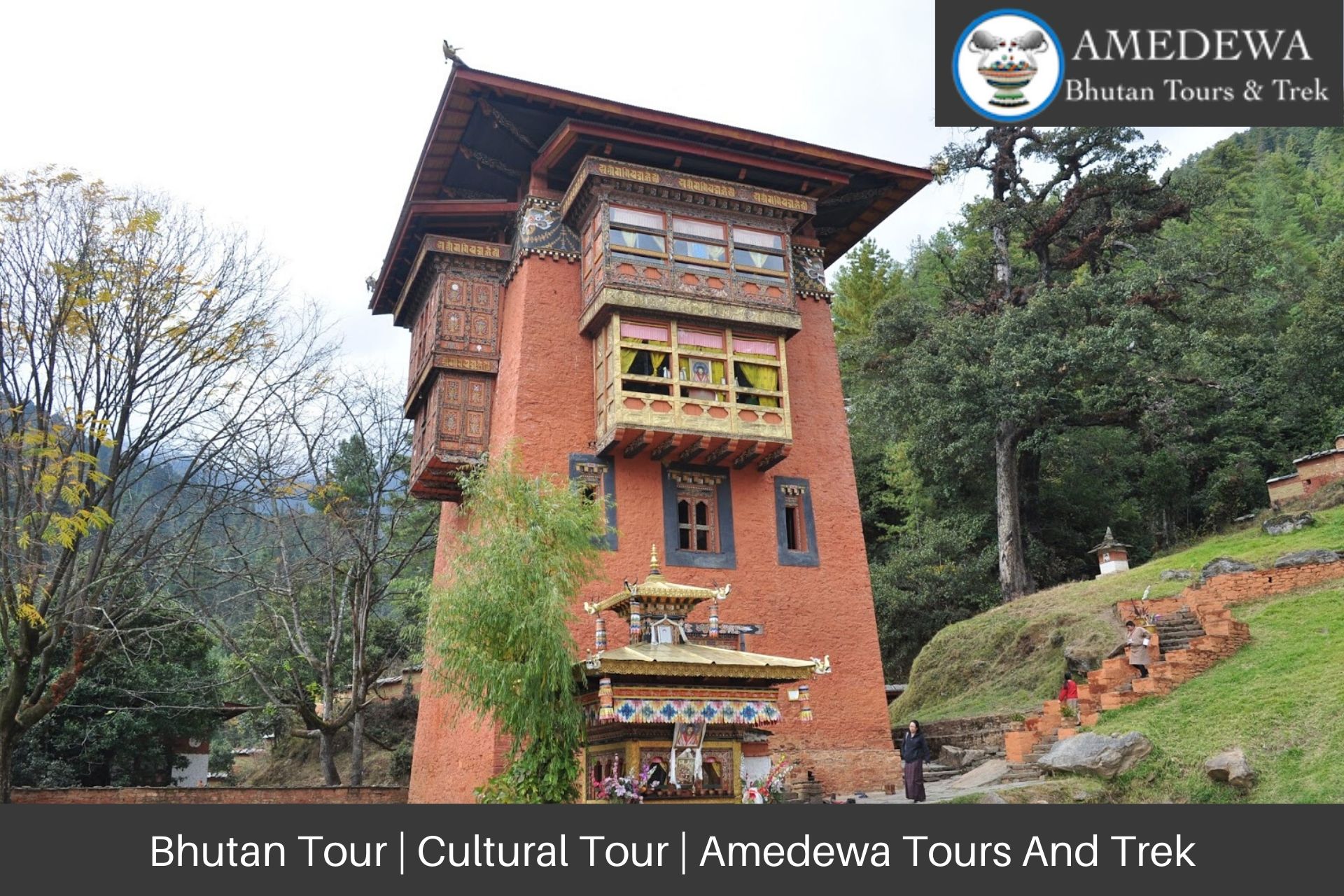 The flight into Bhutan takes you close to the great Himalayas, offering dazzling scenic views of some world’s highest glacial peaks. As you enter Paro valley, you will sweep past forested hills with the silvery Pa Chu (Paro river)  meandering down the valley below. Paro Dzong (fortress) and Ta Dzong (watchtower) on the hills above the town will be a fine sight. Our representative will meet you at Paro airport, and after completion of arrival formalities you will be transferred to Bhutan’s capital, Thimphu, an exciting blend of tradition and modernity. and we will start our cultural tour of Bhutan in the next day.

Overnight at the hotel in Thimphu.

Today’s full day of Bhutan cultural tour include the following

After lunch visit changgangkha lhakhang  and visit  Folk Heritage Museum: These museum which opened in 2001, provide fascinating insights into Bhutanese material culture and way of life.

Drive to farm stay where by you can visit monk/lama and get blessed.

Today after breakfast we will drive to the road end and start our hike to Tango monastery, It was founded by Phajo Drugom Zhigpo in the 13th century and built in its present form by Tenzin Rabgye, the 4th Temporal Ruler in 1688.

And later hike to Cheri monastery, established in 1620 by Ngawang Namgyel 1st zhabdrung Rinpoche, the founder of the Bhutanese state.

After early breakfast, drive up to Dochu-la pass (3,088m/ 10,130 ft) stopping briefly here to take in the view and admire the chorten, mani wall, and prayer flags which decorate the highest point on the road. If skies are clear, the following peaks can be seen from this pass (left to right): Masagang (7,158m), Tsendagang (6,960m),  Terigang (7,060m ), Jejegangphugang (7,158 m ), Kangphugang (7,170 m ), Zongphugang (7, 060 m ), a table mountain that dominates the isolated region of Lunana – finally Gangkar puensum, the highest peak in Bhutan at 7,497m. Then continue onwards, reaching Punakha  town in time for lunch. then continue to visit Punaka dzong and then suspension bridge and a short hike to the  fertility temple.

Arrive at Trongsa late afternoon and check into the hotel  for the night.

After breakfast, visit Trongsa Dzong. Built in 1648 it was the seat of power over central and eastern Bhutan. Both the  first and second Kings of Bhutan ruled the country from this ancient seat. All four Kings were invested as Trongsa Penlop (‘governer’) prior to ascending the throne, and the present Crown Prince now holds the post. The Dzong is a massive structure with many levels, sloping down the contours of the ridge on which it is built.

On arrival in Bumthang, check in at your hotel  overnight in Bumthang.

Bumthang is the general name given to combination of four valleys – Chumey, Choekhor, Tang and Ura with altitude varying from 2,600m to 4,000m. It is home to many of prominent Buddhist temples and monasteries.  Visit to Kurje Lhakhang, where the saint Padmasambhava subdued a local demon and left his body imprint on a rock. The Jambey Lhakhang (7th century temple), Tamshing Lhakhang (housing some of the oldest wall paintings in Bhutan) and Jakar Dzong (administrative center of the region). Stroll in the village, visit the little handicrafts shop at the entrance to the town, and perhaps take refreshments at a local restaurant. Overnight at the lodge in Bumthang.

After breakfast drive to Punakha. Afternoon visit Punakha Dzong, a massive structure built at the junction of two rivers. Punakha was Bhutan’s capital until 1955, and Punakha Dzong still serves as the winter residence of the central monk body. Bhutan’s first King, Ugyen Wangchuck, was crowned here in 1907. The fortress has withstood several damages from fire, earthquake and flood over the centuries. The latest flood, in October, 1994, caused great damages to the fortress but miraculously spared its most holy statue. Also visit Khamsum Yulley Namgyal Chorten, a stupa. Overnight at the hotel in Punakha /Wangduephodrang.

After breakfast, drive to Paro en route visit Simtokha Dzong. This dzong, built in 1627 is the oldest in Bhutan. It now houses the Institute for Language and Culture Studies. Afternoon visit to Ta Dzong, which in the past served as watchtower for Paro Dzong (Rinpung Dzong) and now houses the National Museum. Then walk down the trail to visit Rinpung Dzong, the Dzong houses the monastic body of Paro and administrative office  of Paro district. Overnight at the hotel in Paro.

After lunch, drive up the valley to Drukgyel Dzong, built in 1647 by the Shabdrung to commemorate the Bhutanese victory over the Tibetans in war of 1644.

If interested go to hotstone bath and relax in the evening

After breakfast in the hotel, drive to the airport for flight to onward destination.

Janka resort or Tenzingling resort or any equivalent in Paro