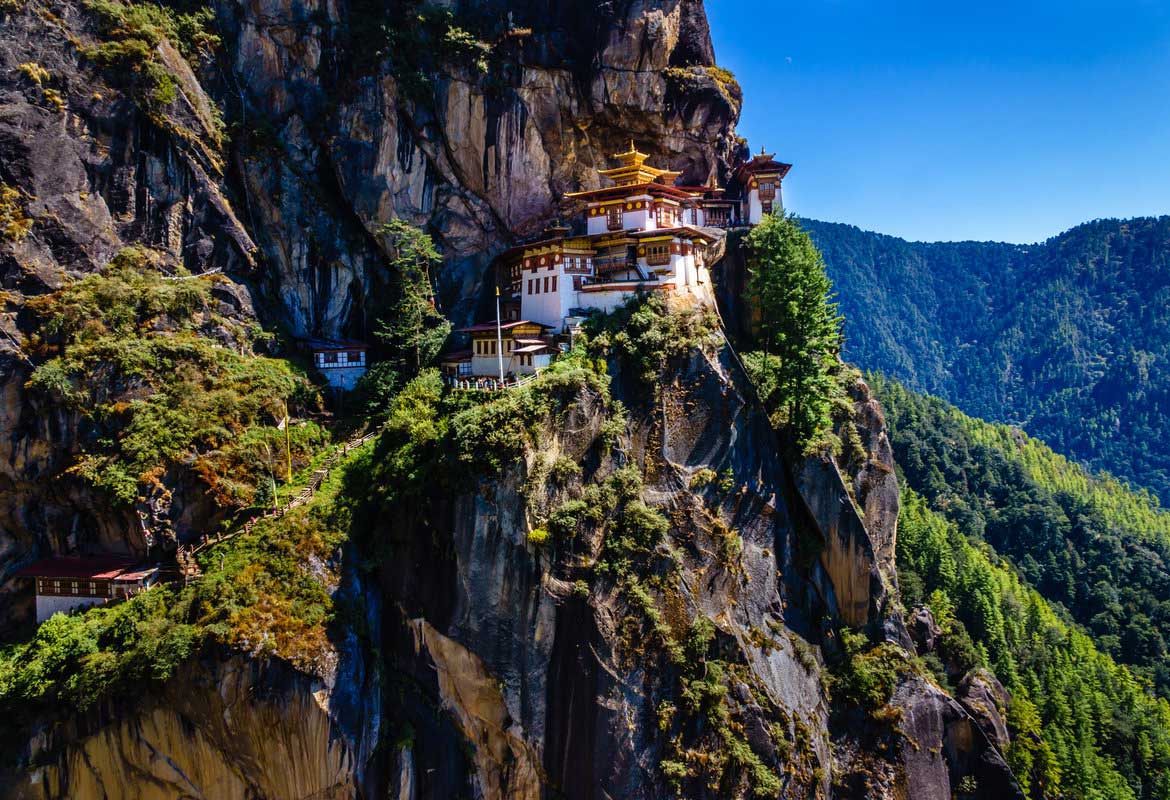 National Memorial Chorten: The building of this landmark was envisaged by the third king, His Majesty Jigme DorjiWangchuck, as a monument to world peace and prosperity. Completed in 1974 after his untimely death, it is both a memorial to the Late King (“the Father of modern Bhutan”) and a monument to world peace. The paintings and statues inside the monument provide a deep insight into Buddhist philosophy.

The flight into Bhutan takes you close to the great Himalayas, offering dazzling scenic views of some of the world’s highest glacial peaks.. Our representative from Amedewa Tours And Trek will meet you at Paro airport, and after completion of arrival formalities you will be transferred to Bhutan’s capital, Thimphu, an exciting blend of tradition and modernity. Overnight at the hotel in Thimphu.

National Memorial Chorten: The building of this landmark was envisaged by the third king, His Majesty Jigme DorjiWangchuck, as a monument to world peace and prosperity. Completed in 1974 after his untimely death, it is both a memorial to the Late King (“the Father of modern Bhutan”) and a monument to world peace. The paintings and statues inside the monument provide a deep insight into Buddhist philosophy.

Institute for ZorigChusum (commonly known as Painting School) where students undertake a six-year course on the 13 traditional arts and crafts of Bhutan;

After lunch visit changgangkhalhakhang and visit Folk Heritage Museum: These museum which opened in 2001, provide fascinating insights into Bhutanese material culture and way of life.

Drive to farm stay where by you can experience local and cultural life style of Bhutan with delicious home made dinner.

Today after breakfast we will drive to the road end and start our hike to Tango monastery and later hike to Cheri monastery as well.

After early breakfast, drive up to Dochu-la pass (3,088m/ 10,130 ft) stopping briefly here to take in the view and admire the chorten, mani wall, and prayer flags which decorate the highest point on the road. If skies are clear, the following peaks can be seen from this pass (left to right): Masagang (7,158m), Tsendagang (6,960m), Terigang (7,060m ), Jejegangphugang (7,158 m ), Kangphugang (7,170 m ), Zongphugang (7, 060 m ), a table mountain that dominates the isolated region of Lunana – finally Gangkarpuensum, the highest peak in Bhutan at 7,497m. Then continue onwards, reaching Punakha town in time for lunch. then continue to visit Punaka dzong and then suspension bridge and a short hike to the fertility temple.

In the evening drive to wangdiphodrang and stroll town

Halt at Punakha in the evening

On to Trongsa across Pele-la pass (3,300m/10,830 ft), the traditional boundary between east and west. The pass is marked by a large white chorten prayer flags. There is an abrupt change in vegetation at this point, with mountain forest replaced by high altitude dwarf bamboo.

Arrive at Trongsa late afternoon and we will visit Trongsa Dzong.
and after that check into the hotel for the night.

After breakfast, we will start early drive to Bumthang and make a visit to Bumthang festival called as SumthrangRabney

The drive to Bumthang, 68 km from Trongsa, a journey of about 3 hours, over the Yutong-la pass (3,400m/ 11,155 ft). The road winds steeply up to the pass, 28 km from Trongsa, then runs down through coniferous forest into a wide, open cultivated valley known as the Chumey valley.

Bumthang is the general name given to combination of four valleys – Chumey, Choekhor, Tang and Ura with altitude varying from 2,600m to 4,000m. It is home to many of prominent Buddhist temples and monasteries. Visit to Kurje Lhakhang, where the saint Padmasambhava subdued a local demon and left his body imprint on a rock. The Jambey Lhakhang (7th century temple), Tamshing Lhakhang (housing some of the oldest wall paintings in Bhutan) and Jakar Dzong (administrative center of the region). Stroll in the village, visit the little handicrafts shop at the entrance to the town, and perhaps take refreshments at a local restaurant. Overnight at the lodge in Bumthang.

After breakfast drive to Punakha. Afternoon visit Punakha Dzong, a massive structure built at the junction of two rivers. Punakha was Bhutan’s capital until 1955, and Punakha Dzong still serves as the winter residence of the central monk body. Bhutan’s first King, UgyenWangchuck, was crowned here in 1907. The fortress has withstood several damages from fire, earthquake and flood over the centuries. The latest flood, in October, 1994, caused great damages to the fortress but miraculously spared its most holy statue. Also visit KhamsumYulleyNamgyal Chorten, the newly built stupa. Overnight at the hotel in Punakha /Wangduephodrang.

After breakfast, drive to Paro en route visit SimtokhaDzong.This dzong, built in 1627 is the oldest in Bhutan. It now houses the Institute for Language and Culture Studies. Afternoon visit to Ta Dzong, which in the past served as watchtower for Paro Dzong (Rinpung Dzong) and now houses the National Museum. Then walk down the trail to visit Rinpung Dzong, built in 1646 by ShabdrungNgawangNamgyal , the first spiritual and temporal ruler of Bhutan, the Dzong houses the monastic body of Paro, the office of the Dzongda (district administrative head) and Thrimpon (judge) of Paro district. The approach to the Dzong is through a traditional covered bridge called NemiZam. A walk through the bridge, over a stone inlaid path, offers a good view of the architectural wonder of the Dzong as well as life around it. It is also the venue of Paro Tshechu, held once a year in the spring. Overnight at the hotel in Paro.

After lunch, drives up the valley to Drukgyel Dzong, built in 1647 by the Shabdrung to commemorate the Bhutanese victory over the Tibetans in war of 1644.

While returning to hotel visit en route, Kyichu Lhakhang, built in the 7th century by the Tibetan king, SongtsenGampo. Overnight at the hotel in Paro.

After early breakfast in the hotel, drive to the airport for flight to onward destination.