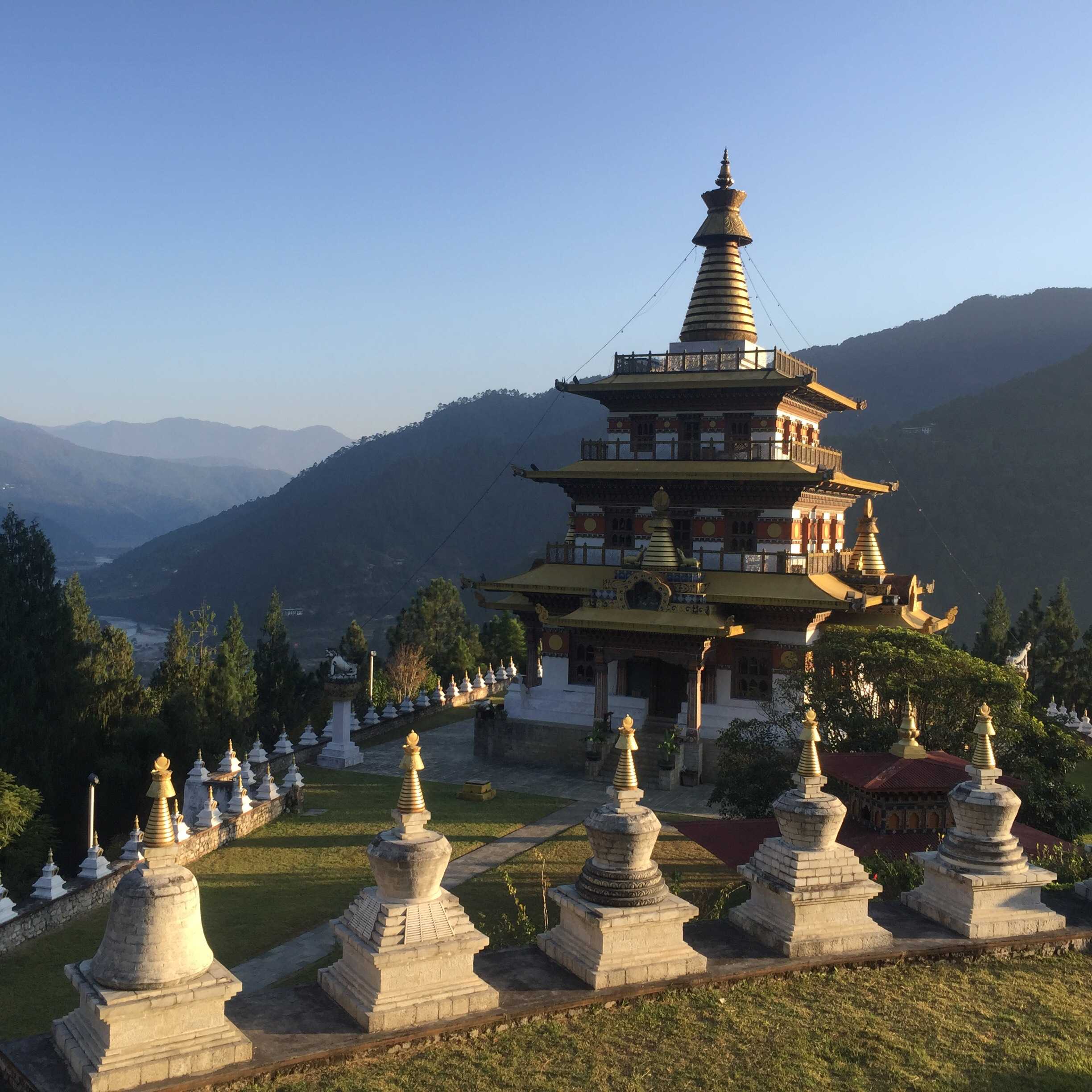 The National Memorial Chorten was built in 1974 to honor the late King Jigme DorjiWangchuck. A chorten is a hemispherical shaped memorial stupa. Known as the most visible religious landmark in Bhutan, it is used as a place of meditation.

Outside Thimphu is Simtokha Dzong the oldest fortress in Bhutan. Legend says it was built to imprison a demon that was terrorizing the area. The first fortress of its kind, it features beautiful Buddhist paintings and carvings.

Tashicho Dzong , a traditional fortress and Buddhist Monastery, is the largest in the city. Featuring distinctive Bhutanese architecture, using neither nails nor written plans, the structure serves as the current seat of the King of Bhutan.

On our way to Punakha, the former capital of Bhutan, we will stop atDochula pass Providing stunning 360-degree views of the Himalayan Mountains, it is also the location of the 108 DrukWangyal Chortens. AshiDorji Wangmo Wangchuck, the present Queen Mother of Bhutan, built the memorial to commemorate Bhutan’s victory over Indian militants and to liberate the souls of those who died.

Sitting at the fork of two rivers, Punakha Dzong is considered one of the most beautiful spots in Bhutan. With spectacular displays of Bhutanese architecture, it stands like a medieval city surrounded by lavender Jacaranda trees. Built in 1637, the six-story structure is the second oldest and second largest dzong in Bhutan. It still serves as the winter home of the JeKhenpo, Chief Abbott of the clergy. In 2011, it hosted the royal wedding of King Jigme KhesarNamgyelWangchuck and Queen Jetsun Pema.

KhamsumYully Monastery is a one-of-a-kind example of Bhutanese art and architecture, built by the third Queen Mother,

AshiTsheringYangdonWangchuck.. Accessible only by foot, the one-hour walk crosses over a suspended footbridge that is adorned with colorful prayer flags.

We head back to scenic Paro Valley home to many of Bhutan’s oldest monasteries and the country’s only airport. This mixture of old and new makes Paro an important part of Bhutan’s past, present, and future.

Paro (Rinpung) Dzong means Fortress on Jewels because it was built using stones rather than clay. It is an excellent example of 15th-century architecture and one of the most impressive dzong in Bhutan. It currently serves as the government center of Paro.

Visit cantilever bridge that crossed the river below the fort .

Located on a hill above Para Dzong is Ta Dzong . This cylindrical watchtower was built in 1649 and converted into the National Museum of Bhutan in 1968. The spiral-shaped building holds antiques, art, textiles, weapons, and household items that tell the history of Bhutan.

We will take a two to three hour hike to Tiger’s Nest/ Taktsang Monastery which is one of the most photographed monasteries in Bhutan. Accessible only by foot, this sacred site was built precariously on the cliff’s edge, more than 10,000 feet above sea level.

A short drive away is the ruins of Drugyel Dzong The great ZhabdrungNgawangNamgyal built this fortress in 1647 to fight invading Tibetan armies. In 1957, a fire destroyed the dzong, but it was left in ruins as a reminder of Bhutan’s glorious past military victories.

We end our tour with a visit to KyichuLhakhng, one of the oldest Buddhist temples in Bhutan. This is the second of two temples built in Bhutan by Tibetan King SongtsenGambo in a single day to hold down the giant demoness who was preventing the spread of Buddhism.

We bid fond farewell to this beautiful Himalayan country And we look forward to seeing you again in this beautiful land of endless Enchantments! TashiDelek